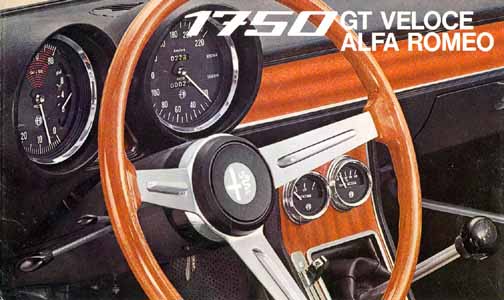 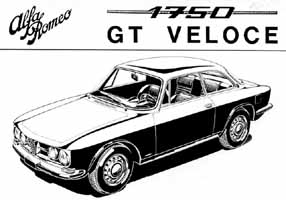 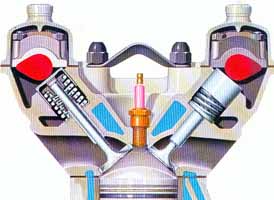 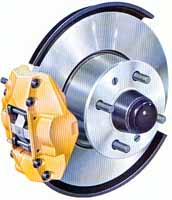 A true Grand Touring sports car: The Alfa Romeo GT is a name synonymous throughout the world with
with elegance and sporting performance. Its present outline, a perfect example of sober design, has
been re-styled at the front to carry four headlights. Beneath the surface, however, the 1750 GT
Veloce is a completely new creation from the engine down to the smallest detail of finish. 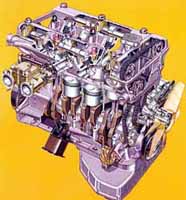 Its performance is outstanding even for a sports car. Power: 132 BHP (SAE). Top speed: 195 km/h,
more than enough for even the most deserted motorway. Acceleration: 0-100 km/h 9.2 seconds,
1 km from a standing start in 32 seconds and a maximum torque of 137.4 ft lbs. - SAE,
the highest figure for its cylinder capacity ever obtained from a GT engine. 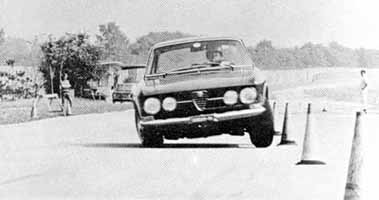 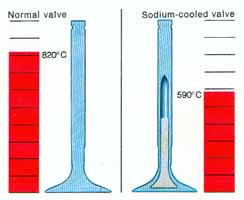 These figures are sufficiently impressive even for a competition vehicle. In this instance, however,
they describe the characteristics of a car which because of its durability, safety, and comfort,
can be driven without fuss in city traffic to and from work, or on a Sunday outing with
the family. The engine is exceedingly powerful but because maximum power is
developed  at only 5,500 rpm it is an engine that will last for years. 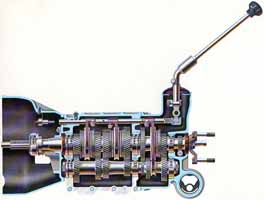 The five forward gears allow a cruising speed of 150 km/h using only half of the maximum
power. The rest is held in reserve to provide exhilarating acceleration when required.
The headlights, four in all, very powerful and suitable for speeds greater than even
the 1750 GT Veloce can attain. The breaks are servo-assisted and have discs on
all four wheels. They have a total working surface of 396.8 square inches.
Those at the rear are regulated by a particularly effective compensating
valve, so very useful when breaking abruptly or on slippery roads. 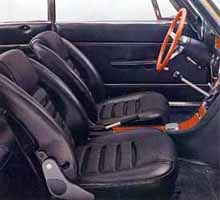 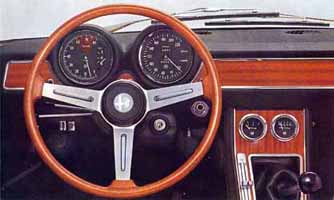 The lay-out of the controls is entirely new, due to the use of a center
console which contains the water temperature gauge, the fuel gauge
and the heater controls as well as the gear lever. However, the
main instruments are directly in front of the driver. 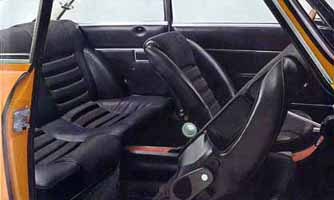 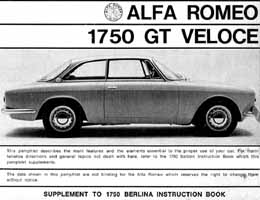 The comfort is as excellent as the performance is impressive. The interior has been made com-
pletely quiet by paying particular attention to the mounting of the gearbox and clutch,
and by using the most modern sound proofing materials. The seats are bucket shaped,
perfectly air-vented and above all, molded to the body in such a way that one
is always completely relaxed even at the end of a long journey driven at speed.
The backrests are adjustable and after having tipped forward to allow
access to the rear, lock back into place automatically. 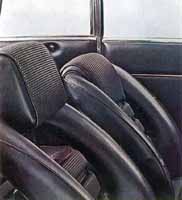 The front passenger seat incorporates a headrest adjustable for height, the rear seats are
contoured and very comfortable and have sufficient leg room to accommodate two passen-
gers securely. Provision is also made for the fitting of safety belts. Such a high stan-
dard of travelling comfort is completed by an air temperature control system with
twin speed fan and a boot sufficiently large for the longest journey. 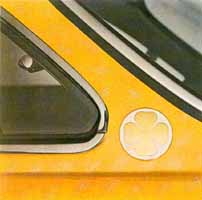 The 1750 GTV is certainly faster than the train...

...actually, it's even faster than an airplane!